Pawth Home is a game about saving and helping animals that are walking among the streets homeless. Your job is to find these lonely animals and build your own shelter for them. By collecting garbage in your surroundings and recycling them will get you started with the economy.
Some animals are homeless and some are just lost, by returning the lost pets you’ll get a reward depending on the animal.

This is a kind and caring game that could make people think twice when wanting to adopt or buy an animal they cannot take care of. The player gets a chance to save homeless/lost animals and also to recycle garbage on a daily basis.

There are homeless animals and there are lost animals. The homeless animals are scruffy, dirty and scared while the lost pets are used to their surroundings and are wearing some kind of gear – for example the dogs and cats are wearing collars.
The player has two buttons on the screen when outside in the real world, one for sheltering an animal and one for returning them. By pressing one of the buttons and then clicking on the focused animal it’ll do as the button says, either return the animal or take it in. If the player shelters an animal that is actually lost, the player loses that amount of coins the animal is worth for the return. 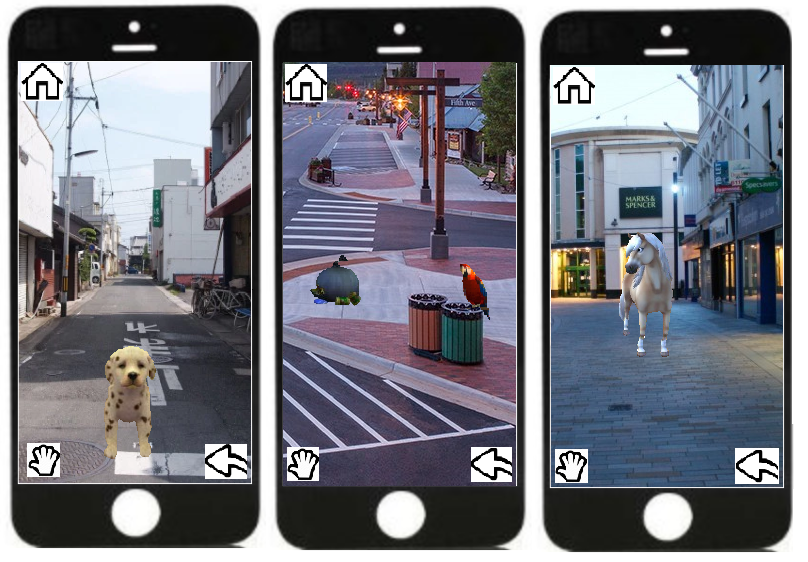 Player will get a notification on their phone if the animals in one of the houses, exhibits or stables are hungry.

Interface 1
The Shelter – Where the player can spend their coins on different buildings, gear and decorations to develop the perfect shelter. When starting the game, the player will start out with a Small Cat House and 3 000 coins, and then continue from there.
In the shelter area it is only allowed to have a certain amount of animals in each building there is, however this is upgradable.
After an animal is brought in, it will take 24 hours until it is ready for adoption. When the player clicks on a building, a list of all the animals that are in it will appear and a timer of how many hours it is left for when it is ready for adoption.

Interface 2
The World – The camera is used for looking out in the real world and finding these animals and also the garbage piles for the extra coins.
When an animal has appeared the player will get a notification from the app on their mobile phone saying for example that a dog is 300 meters away. Which in this case the player has to get some shoes on and get moving.

This is a single player game but when there is a horse on the loose, all players near you also get a notification and whomever gets to the horse first will be able to either return it or shelter it. Due to that the horse will be the most valuable, you’d want to get there first.