Shot In The Dark

When we first got this assignment we did not have Battleship nor Jenga – it was pretty difficult coming up with an idea. So we had to improvise and try with different objects:

Styrofoam – Obviously this did not work at all since Jenga is all about the smoothness of the wooden bricks and also the weight of the bricks is SUPER important. But these were the first ”objects” we thought of and we tried it even though we knew it wouldn’t work whatsoever.

Markers – Since the Styrofoam was too light, we tried with something else we had that was a bit heavier. It ALMOST worked with the markers but first of all they were too big, also kinda light, and had some kind of design on them that didn’t make them as smooth as we wanted. So then we tried taping around the markers but that still did not show a good result.

Cardboard –  Surprise surprise! The markers didn’t work either, we tried 3 small layers of cardboard taped together to make them smooth and perhaps heavier. It didn’t go the way we wanted, we couldn’t make it work with the edges being pointy from the tape. But, at least we tried.

After not having the actual Jenga game to try our ideas, rules and instructions. It took us a day to try it out – but eventually one of the members from our group brought Jenga with him and we had a full day of ideas popping out and we felt finished in a day (but of course we changed a lot during the week before the presentation). 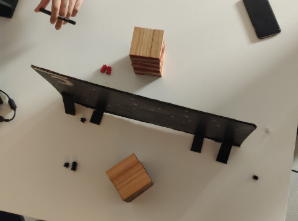 During the games development we had a blast! There were barely any difficulties except for when we didn’t have either of the games from the start. But the group held together and we worked great as a team. We learned that roles are important, from the start we gave each member a role but at the end of the day we all helped each other and worked on everything together – which may not be such a bad thing.
We also realized that testing different prototypes of the game IS important, even though we knew from the start that the styrofoam, markers and cardboard wouldn’t work we still took the time to create these tests. We though about using a timer for the every turn, but since we have the repairing mechanic we didn’t see the use of the timer.

We’re extremely happy with the result, we had multiple students that wanted to play the game over and over again even when we weren’t present – which is a very good sign that your game is successful!